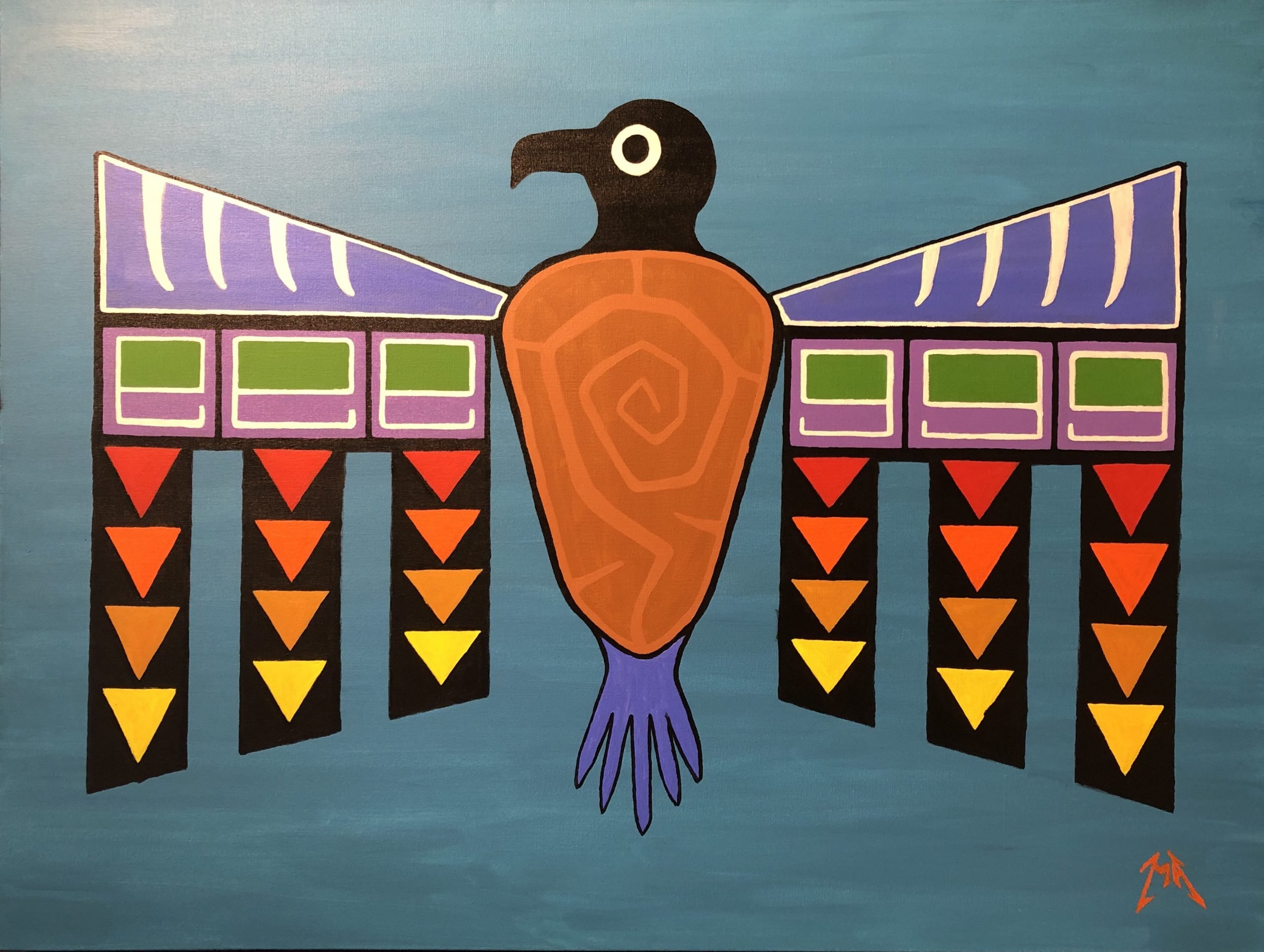 Mike Alexander is an Anishinaabe artist from Swan Lake First Nation in Treaty #1 territory in Manitoba, now relocated to his new home in Kamloops, BC, Canada.

Mike launched his journey as an emerging artist at the age of 40. His unique and original ink drawings were inspired by symbolism of his Ojibway roots as well as his life-long appreciation for high contrast black and white ink drawings.

This passion led Mike to his first solo exhibition, a show devoted to his ink drawings in late 2017 in Victoria.

In the spring of 2018, Mike was awarded a small grant from the First Peoples' Cultural Council. With it, he pursued a practice in acrylic painting and has amassed a small body of work that summons his own Anishinaabe teachings and stories. He was able to connect with and enter into a mentorship with Kwagiulth artist and recipient of the Order of BC, Carey Newman as well as Mohawk artist and Artist in Residence for the City of Victoria, Lindsay Delaronde.

In 2019, Mike had his second solo exhibition open at the Old Courthouse Gallery in Kamloops, BC. Titled "Crane Standing in the Shadow of Song", the exhibition consisted of 8 recent works of acrylic paint on canvas. Mike made a design in support of Orange Shirt Day, an occasion honoring residential school survivors across Canada and this design was very well received in Kamloops and the BC Interior. He was also invited to share his most recent works at the United Way Thompson Nicola-Caribou office in Kamloops.

Mike also received a $10,000 grant from the First People's Cultural Council to produce a graphic novel that he has written and is in the final stages of illustrating. Titled "Last Night on Earth", Mike has written a dystopian tale of a near future when the Wendigo, a mythological creature known to the Anishinaabe and Algonquin People, are freed from melting arctic ice shelves in an era of climate change, to return to the Spruce Narrows First Nation in southern Manitoba. Mike hopes to see this project published in 2020.

Most recently, Mike published an article for Visons, BC's award-winning mental health and substance use Journal. He is also a contributing writer for Broadview Magazine.

He remains on a trajectory upward as he follows his dreams of being a professional artist. His first Vancouver, BC art show, Internal Landscapes,ran for February 2020 at Massy Books. Mike has also accepted an offer of representation by Excellent Frameworks - Home of the EJ Hughes Gallery in Duncan, BC.

Mike's work has appeared in a handful of group exhibitions at galleries in Calgary, Toronto, Prince George.

His art depicts images motivated by his personal healing journey, his understanding of the interconnectedness between all life and the appreciation of and his pride in his cultural heritage

​“Culture is the widening of the mind and of the spirit.” –Jawaharlal Nehru

Excellent Frameworks Gallery has been a part of Duncan, B.C. for over 40 years providing custom framing and gallery services to Vancouver Island.